This delicious (and surprisingly filling) recipe for keto cinnamon rolls makes for a tempting treat. Whether you have it for breakfast or as a dessert, you are going to love this low carb twist on the old sugar-laden favorite.

Growing up, I am pretty sure cinnamon rolls were one of my favorite things to eat. Hmm, that extends to pretty much anything with sugar in it doesn't it?

Even so, there's nothing quite like the sensation of biting into a warm cinnamon roll – it brings back nothing but good memories to me. 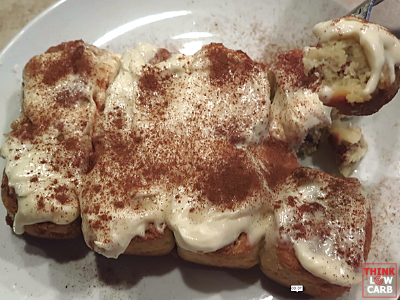 Of course nowadays, the traditional cinnamon roll is off limits and for good reason! You really couldn't eat a more high carb, calorie laden, belt busting dessert if you tried. Even so, the humble cinnamon roll is enjoyed the world over.

In fact, in the country where they were invented (Sweden), the average person eats the equivalent of more than 300 cinnamon rolls per year! There's even an International National Cinnamon Roll Day, known as kanelbullens dag, which is celebrated each year on October 4th.

So it's clear cinnamon rolls have worldwide appeal but what can we do to change up some of those not-so-keto ingredients while still finding a way to enjoy this one-of-a-kind treat? Well, with a little experimentation and a bit of taste testing, I think we've hit paydirt!

These rolls are a tasty mix of a buttery, cinnamon-filled center and a creamy, decadent cream cheese frosting. We've made this recipe with coconut flour which gives the denseness and mouth feel you know and love – no wimpy rolls here I promise!

They've got a reasonable amount of 386 calories per serving and at only 5 grams of net carbs per serving, these low carb cinnamon rolls fit nicely into almost anyone's low carb or keto lifestyle.

Making these keto cinnamon rolls is a bit involved but the effort will be worth it. From start to finish, it should take you about an hour.

A note on sweeteners… 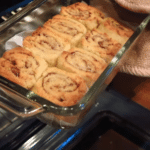