Molasses fans are going to love these Keto “Molasses” Bites. These chewy bites are perfect for satisfying a sweet tooth or provide a quick delicious protein snack throughout the week.
Each bite explodes the bold sweet taste of molasses mixed with spices of ginger, cinnamon and cloves. Every delicious morsel is topped with sweet crunchy granules. 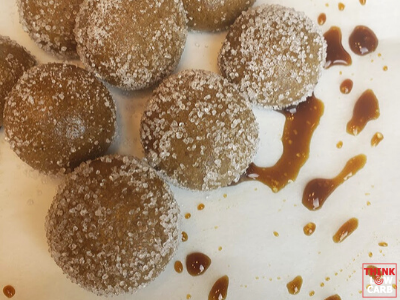 Since molasses is made from sugarcane and not keto friendly, how do we still get to experience its bold sweet taste??? We use yacon syrup.
What is Yacon Syrup?
If you’ve been around the low carb community for a while, you might be familiar with yacon syrup, but if you’ve never tried it this recipe will make you want to buy a bottle of yacon syrup and give it a try.
Not only is yacon syrup’s bold sweet taste similar to molasses but its color, smell and viscosity closely resembles molasses also. This natural sweetener is made from yacon roots, a potato-like plant native to South America. 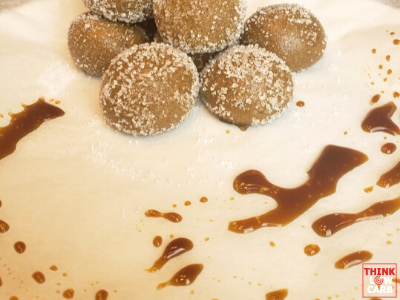 Why is Yacon Syrup Popular in the Low Carb Community?
A large component of yacon is a sweet soluble fiber called fructooligosaccharides (FOS). FOS is a low-calorie carbohydrate that our bodies cannot digest. Since we are not capable of digesting it, yacon syrup will not increase your blood sugar level. With a glycemic index of 1, yacon syrup is considered a good natural sugar alternative.
Another bonus of FOS are their prebiotic effects which stimulate growth of healthy bacteria in the gut. This is a great benefit for anyone experiencing digestive issues.
Yacon syrup’s macro profile meets the criteria of sweeteners for the low carb and ketogenic diet but you still need to be cognitive of the amount you use. One teaspoon of yacon syrup contains 15 calories and 4g carbohydrates and 3g total sugars.

How to Use Yacon Syrup
Besides molasses, yacon syrup is also a great substitute for honey, maple syrup or corn syrup.

Where to Find Yacon Sryup
Most natural grocery stores sell yacon syrup. You can also easily buy it from online retailers like Walmart or Amazon.


You'll love snacking on these easy no bake bite sized treats all week long! Just follow the simple recipe below. 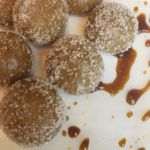